Connecting to Your Observatory Locally via WiFi or Ethernet

This is the recommended way to log into your camera initially as it is very similar to the remote log in method that you will use later once your camera is installed. If you have trouble logging in via Ethernet or WiFi, it is also possible to log in using an HDMI or VGA monitor and a USB keyboard.

All DFNEXT systems have WiFi connectivity out of the box, and it is possible to add WiFi to DFNSMALLs and DFNKITs as long as the correct USB WiFi adapter is used. The observatory acts as a WiFi access point (this is called AP mode); to connect, just select the relevant network SSID from your device (e.g. DFNEXT13 is the SSID of the WiFi network to connect to DFNEXT13.

One important thing to note is that, if the observatory is connected to the internet via an existing local WiFi network it will be in client mode instead of host mode, so there will be no DFN... network to connect to. In this case you will need to connect to the same WiFi network that the camera is using. The process of finding the IP address to log into in this case is slightly different and depends on how the local WiFi network is configured; it might be simpler to log in via the VPN.

Logging In via the Terminal

To log in via the command line you will need to know the IP address of the camera and the username you would like to use. As some of the commands that we often use require root permissions, we usually log in as the root user. The commands below should work for Linux and Mac OS X users.

If you are connected via Ethernet (Laptop/eth0 port)–

the IP address of the observatory is 172.16.1.101 . You can connect by opening a terminal and running the command:

If you are connected via WiFi (observatory in AP mode)–

the IP address of the observatory is 172.16.0.101 . You can connect by opening a terminal and running the command:

The camera will then prompt you for it's root password or you will automatically logged in via your ssh key. (SSH keys are a more secure, faster and more convenient alternative to passwords for logging into computers over the network).

Difficulties logging in as the root user using a password

For security reasons, password based authentication is disabled for the root user by default in the latest (DFNEXT) observatories. If you want to log in using passwords, you will need to log in to the dfn-user user and then change to the root user using the command:

We suggest installing your ssh key so that this is not required.

Logging in via the Terminal from Windows

If you are using Windows, you will need to install an ssh program of some kind. For Windows 7 and lower we recommend the Windows program PuTTY and for Windows 10 we recommend using the Microsoft Windows Subsystem for Linux (through PuTTY still can be used).

The advantages of using the Microsoft Windows Subsystem for Linux are that the usage will more exactly match the instructions given here, and you will have local access to the same command line tools that you will use on the camera (which may be helpful). If you have very little drive space available you may want to use PuTTY instead, as the Microsoft Windows Subsystem for Linux installs a full command line Linux compatibility layer (like having a virtual GNU/Linux distro installed inside Windows, except all of the system calls are handled by the Windows kernel instead of the Linux kernel) and this does take up some storage space. To get similar functionality on older versions of Windows, users can try Cygwin or install a Linux distribution such as Debian as a virtual machine. After installing the Microsoft Windows Subsystem for Linux, launch it from the start menu and follow the above instructions as normal (as if you are on Linux). 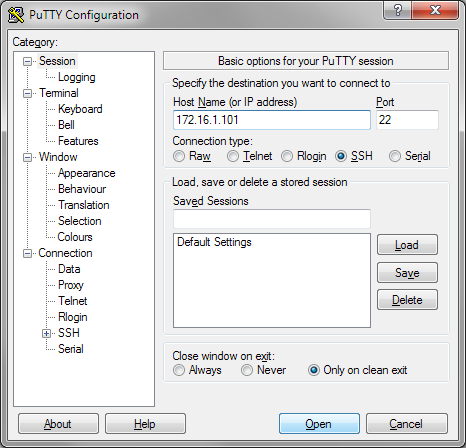 When connecting via Ethernet (Laptop eth0), enter the camera IP like so, and hit Open to connect using PuTTY

Installation using the MSI 'Windows Installer' is probably easiest. This version is either the first of second file on the PuTTY download page. Once installed, run PuTTY from the start menu, enter the IP address of the camera in the configuration screen and hit "Open".

Logging in via the Web Interface

Instead of using the text based terminal you can also use the graphical web interface to control most functionality of the camera. It is especially useful when using a mobile device.

If you are connected via Ethernet (Laptop/eth0 port)–

If you are connected via WiFi (observatory in AP mode)–